We Are The Roots: Black Settlers and their Experiences of Discrimination on the Canadian Prairies

Home/We Are The Roots: Black Settlers and their Experiences of Discrimination on the Canadian Prairies

This event has passed.

We Are The Roots: Black Settlers and their Experiences of Discrimination on the Canadian Prairies 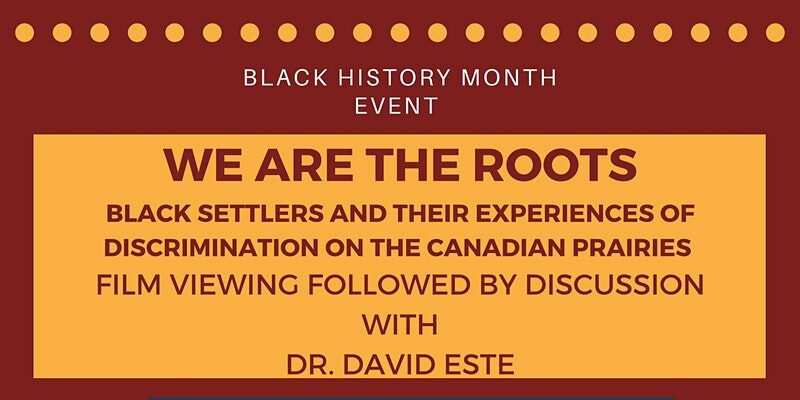 The Alberta Men’s Network is honoured to invite you to this event for Black History month. We are partnering with the Marlborough Community Social Worker to present a viewing of the film:

We will begin with an introduction to the film by Dr. David Este, followed by the viewing and concluding with a discussion and Q&A with Dr. Este.

“Many people have conceptualized Canada as the idyllic escape from racial discrimination in the United States. We Are the Roots: Black Settlers and their Experiences of Discrimination on the Canadian Prairies builds on the effort to dismantle the misconceptions about African Americans reaching utopian societies as they moved farther north. The film confronts this myth about Canada with the lived experiences of blacks who settled here from the early 1900’s to the present. As a film rather than a book, this project forces its audience to connect with its narrators and makes black Canadians inescapably visible. It visually asserts that these communities’ stories are part of Canada’s history and that these people are Canadian, nor foreigners. We Are the Roots uses oral histories to make it clear that Canada cannot move forward without acknowledging and understanding all of its past.”